During the last ten years, several critical evaluations of animal research have been written (Ryder 1975, 1983, Pratt 1976, 1980, Ruesch 1978, 1982, Diner 1979, Rowan 1984). These critiques have drawn attention to the plight of laboratory animals and have identified key issues in the controversy surrounding animal research. These key issues include: (1) the nature and extent of suffering inflicted on the animals, (2) the extent of unnecessary duplication of experiments, (3) the cost of the research to taxpayers, (4) the potential benefits to humans derived from the research, and (5) the potential alternatives to using animals in research.

Unfortunately, no field of animal research has been investigated to the extent needed to adequately address these issues. The books cited above were general surveys of animal research. Critiques of specific fields of animal research (Drewett & Kani 1981, Kuker-Reines 1982) addressed some of the issues mentioned above. Also, numerous reports provided examples of experiments that involved considerable animal suffering or that were of questionable value. However, as important as these reports are in exposing problems, they are not substitutes for comprehensive critiques. Compilations of experiments drawn from different fields are open to various countercharges. It could be claimed that the criticized experiments were taken out of context, and this distorted the rationale for the experimental design or the merit of the research. It could also be claimed that the experiments were not representative of studies in their field.

The lack of comprehensive critiques of specific fields of animal research is understandable because “research on research is unusually difficult and time consuming” (Comroe & Dripps 1976, p. 110).

This report is the first in a series of critiques designed to fill the need for comprehensive evaluations of particular fields of animal research. The report evaluates several areas of psychological research that fall under the heading of maternal deprivation. It addresses the issues of cost (both to the animals and to the taxpayers), benefits, alternatives and duplication. Virtually all maternal-deprivation experiments were funded by the federal government and were justified on the basis of their purported relevance to human mental disorders. Therefore, the conclusions of this report should be of interest not only to animal welfare advocates, but also to those concerned about human mental health and allocation of tax dollars.

Maternal deprivation research is noteworthy for several reasons. First, much of this research has been conducted on monkeys and apes. The experimental use of nonhuman primates, our closest relatives, raises particularly serious ethical issues. It is also highly controversial (e.g. Torrey 1984). Large demonstrations against primate research were held throughout the world on April 24th, 1983. Second, many (if not most) maternal deprivation experiments were conducted at Regional Primate Research Centers. These Centers were the targets of the 1983 demonstrations, and have also been criticized by scientists on bureaucratic grounds (see Rowan 1984, p. 125). Third, much of the maternal-deprivation research was directed by the late Harry Harlow, whose experiments and remarks have drawn scathing criticism from animal welfare advocates (e.g. Helton 1985). Rowan (1984, p. 141) noted that “most animal welfare literature that addresses psychological research on animals focuses on Harlow’s studies . . .” Finally, as a field of psychology, and not biomedicine, maternal deprivation research seems particularly difficult to justify on the basis of potential advances to human health (Hubbard 1985).

All of the experiments surveyed in this report involved taking infants from their mothers, sometimes at birth. Depending on the specifics of the experiments, the infants experienced emotional distress or psychological devastation; some died. Infants were sometimes subjected to procedures in addition to maternal separation. For example, monkeys at the Wisconsin Primate Center were separated from their mothers and incarcerated in isolation chambers or ‘wells of despair,’ or exposed to abusive artificial mothers. Some of the more fortunate infants at Wisconsin were left alone in tiny, barren cages.

For convenience, maternal deprivation experiments have been divided into three categories: affection, deprivation and separation. The affection category represents Harlow’s research on ‘the nature of love.’ In these experiments, monkey infants were deprived of their mothers at birth and reared with different types of artificial mothers. The aim of this research was to determine how infants became attached to their mothers.

The deprivation category, like the affection category, includes experiments in which infants were taken from their mothers at birth or shortly thereafter. In contrast to the affection studies, however, the emphasis here was on the effects of the deprivation experience. The deprived infants were usually reared alone, either in wire cages or isolation chambers. They were some-times reared with artificial mothers or other infants.

The final category of maternal deprivation, separation, is a heterogeneous collection of experiments that were once all considered to be animal models of depression. The majority of these experiments examined the consequences of separating an infant from its mother after an attachment bond had formed between them. Most of these separations were temporary. A similar type of separation procedure involved separating infants from other infants. Also included in the separation category, for convenience, are studies involving ‘wells of despair’ (vertical chambers) along with other procedures.

In summary, the experiments surveyed in this report all involved removing mothers from their infants. The aim of these experiments was to determine the effects of this removal or to investigate other aspects of attachment behavior. Several related types of experiments are not included in this survey. These include (1) deprivation experiments not involving infants, and (2) experiments in which infants were removed from their mothers, but not for reasons other than those of interest here. For example, students of sexual behavior have often employed deprivation techniques (e.g. Shaw 1962), but their focus was sexual behavior, not deprivation. 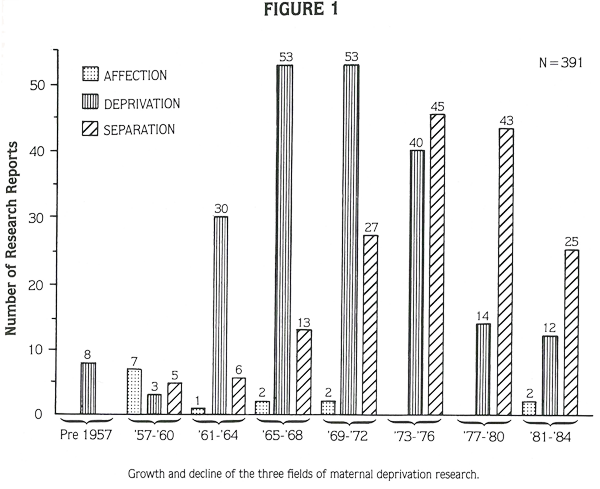 The next chapter (Chapter Two) provides background material on animal models in psychological research. Chapters Three through Five provide summaries and evaluations of each of the three categories of maternal deprivation research. The final chapter includes a general discussion and summary of the report’s findings.