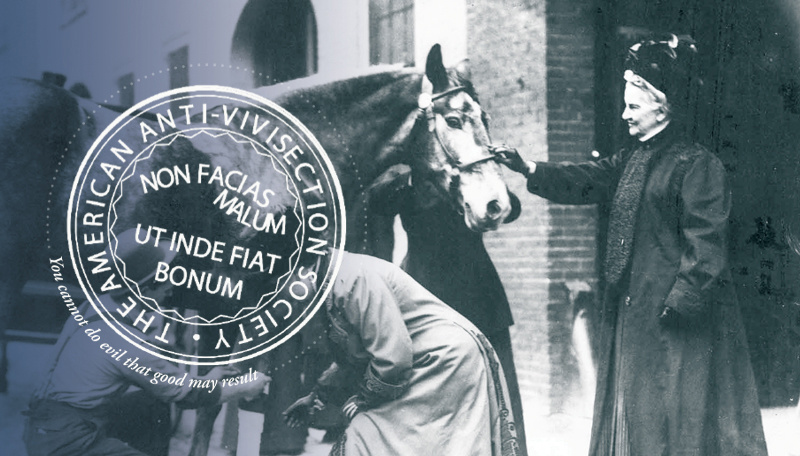 Today, AAVS celebrates 138 years of advocating for animals! AAVS was founded in 1883 by Caroline Earle White, who wanted to protect dogs from being used in horrific experiments by doctors at a local university. At the time, Mrs. White and her female colleagues operated a city shelter in Philadelphia and doctors demanded that they be given dogs for their research. They were always flatly denied.

Realizing that the use of animals in research involved so much unnecessary pain and suffering and that experimenters felt little accountability for their atrocities, Mrs. White believed it was necessary to have an organization devoted to this issue and, thus, AAVS was born. Mrs. White stood against animal research on ethical grounds and stressed that there was a better way to learn the life sciences, and we continue this important mission today with her same dogged determination.

Throughout our history, AAVS has worked to educate the public and bring people together to stand up for animals, and our AV Magazine has been a huge part of that effort. That’s why we want to highlight this special issue of the AV Magazine. It’s a walk back in time, and a fascinating way to explore who AAVS is and our approach to advocacy. We’re proud of our mission and history and we hope you are, too!

March marked the 8th anniversary of when the European Union (EU) ban on animal-tested cosmetics came into full effect. While this ban has inspired similar restrictions around the world, including proposed legislation in the U.S., the European Chemical Agency is taking a position that weakens the ban and requires animal testing of cosmetic ingredients in some circumstances. In response, over 460 cosmetics companies and a coalition of animal groups have joined together to urge the EU to stop any efforts requiring new animal testing for cosmetics. READ MORE »

Researchers in Israel have developed a potential cancer drug, without the use of animals. Instead, they used bio-chips made of human tissue to assess how the drug affects the kidneys, liver, and heart. Clinical testing can begin if they receive approval from the FDA, which requires animal testing to evaluate safety, although the agency has recently been more open to using non-animal methods. About 90 percent of all drugs developed with the use of animals fail in human trials and never make it to market. READ MORE »

Chimpanzees are so much like us…or, are we so much like them? Either way, just like we sometimes take on the same traits as our parents, so do chimpanzees. For example, meet Scrappy. Even though Scrappy never met him, he’s a lot like his Dad, Doug, who also used to strike this unique pose.

While Scrappy is a confident, happy chimpanzee today, his life started like a horror show when he was taken from his mom, Arlene, just hours after his birth at The Coulston Foundation, a notorious lab known for its invasive research and inhumane living conditions. Thankfully, Scrappy was never used in any experiments. When he was three years old, he went to live at Save the Chimps, a Florida sanctuary that cares for over 190 chimpanzees retired from research. AAVS is a long-time supporter of Save the Chimps and has given the sanctuary several grants over the years. They do a great job sharing images and videos of the chimpanzees in their care, so be sure to follow them on social media!