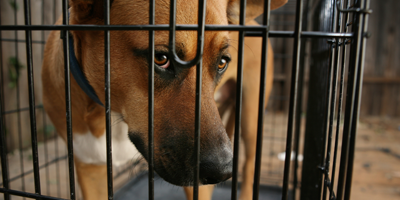 Although it’s hard to imagine, dogs have long been used as research and testing subjects. In fact, in 1883, AAVS was founded specifically to protect dogs from being stolen or otherwise collected off the streets so they could be used in research, often suffering in agony with no analgesic or pain relief. This continued through the first half of the 20th century without regulatory oversight, until 1966 when the Animal Welfare Act (AWA) was enacted, spurred in part by the death of Pepper, a Dalmatian who was stolen from her family in Pennsylvania, transported to New York, sold to a lab by an animal dealer, and then killed during an experiment. Although animal research and testing are now regulated, the AWA does not restrict the use of certain types of animals, including pets, and dogs are still used in experiments today.

According to U.S. Department of Agriculture (USDA) “Annual Report Animal Usage by Fiscal Year” data, in 2018, over 65,000 dogs were held in U.S. laboratories and approximately 60,000 of these were used in experiments, with over 27 percent experiencing pain and distress during testing.

HOW DOGS ARE USED

Dogs are often used in biomedical research investigating heart and lung disease, cancer, and orthopedics. They are also used in toxicity studies to test the safety of drugs and industrial chemicals, but are rarely used to assess the safety of personal care and household products. Most dogs used in research are purpose-bred in laboratories or by private companies that sell strictly to labs. Dogs can be bred to be pathogen-free or genetically manipulated to be a model of human disease.

The most common breed of dog used for experiments are beagles, but not because scientists view them as the best model for human disease. Rather, beagles are convenient to use because they are docile and small, allowing for more animals to be housed and cared for using less space and money.

To acquire dogs with specific traits who are not readily available from breeders, some research facilities obtain dogs directly from pounds and shelters, a practice called pound seizure. These labs may want older dogs to use in age related research or large dogs to study heart disease. Also, medical and veterinary schools have traditionally used dogs from shelters for student training, particularly for surgery. Now the trend is to utilize alternatives that do not harm animals and allow veterinarians to gain experience through beneficial shelter medicine programs.