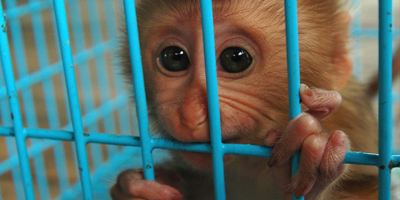 Since 2000, the number of nonhuman primates held in laboratories has increased from over 95,381 to over 107,125 in 2012, an increase of more than 10%. Nearly 30,000 primates were subjected to painful and distressful experiments in 2012. Although these numbers include chimpanzees, because labs are not required to report specific species numbers, it is difficult to know exactly how many chimpanzees are being used in research. However, macaques are the most commonly used primate species. Macaques also make up the majority of nonhuman primates imported for research. Other highly imported species include marmosets, squirrel monkeys, olive baboons, vervet monkeys, and night monkeys. Many primate populations around the world have been adversely affected, as monkeys are stolen from the wild to be used for research purposes.

Click here to read more about trends in the use and import of primates.

Primates are increasingly used in pharmaceutical and bioterrorism experiments, and researchers continue to promote the development of a portfolio of nonhuman primate models for a variety of human diseases and conditions. For example, primates are used in experiments related to infectious disease, like, AIDS, malaria, TB, Lyme disease, and Ebola, as well as, cardiovascular disease, diabetes, drug abuse, maternal deprivation, xenotransplantation (cross-species transplants), toxicology, vaccinations, age-related research, gene therapy, neurosciences, and reproductive biology.

Additionally, primates have rich emotional and social lives, and suffer greatly when confined and used in laboratory experiments. In the wild, they live in groups, often with complex communication and familial social structures, which can be difficult to reproduce in captivity. Furthermore, primates are not just capable of developing relationships; social interaction is important for their psychological well-being. So important, in fact, that some primates will choose companionship over food.