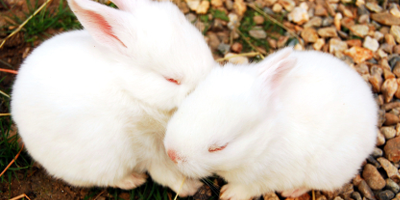 Rabbits are one of the most commonly used animals in research and testing, second only to guinea pigs. Although their numbers have declined over the past two decades, 205,482 rabbits were held in laboratories in 2012. They are also frequently used in experiments that cause pain and suffering. In 2012, over 35%, or 77,206 individual rabbits were subjected to these types of tests. Rabbits are widely used for experimentation and testing mainly due to practical, rather than scientific, considerations. They are small and usually docile, easily restrained, cheap to maintain, and breed prodigiously.

Most people associate the use of rabbits in laboratories with toxicity testing for cosmetic, personal, and household products. The best-known tests are the Draize eye and skin irritancy tests, which are extremely painful and cruel. While being experimented upon, rabbits are often locked into full-body restraints to prevent them from touching eye or skin sores. These tests are not very reliable, and increasing attention is being paid to the development of alternatives to replace the use of rabbits for these categories of toxicity testing.

For medical products such as vaccines, drugs, and medical devices, rabbits are used to test pyrogenicity (the ability of the product to induce a fever). Additionally, because of their high rate of reproduction, rabbits are also used to test developmental or embryotoxicity (the danger that a product will harm a pregnant female or developing fetus).

Rabbits are also used in basic and biomedical research, as models for diseases and disorders of the eyes, skin, heart, and immune system, as well as asthma, cystic fibrosis, and diabetes. Another common use of rabbits is in a painful procedure to produce polyclonal antibodies, which are widely used for a variety of research and diagnostic purposes.

In addition to the suffering caused by experiments, the laboratory environment itself is also particularly noxious to rabbits, causing great stress, weakening their immune systems, and making them more prone to illness.