The Global Tragedy of Bird Flu 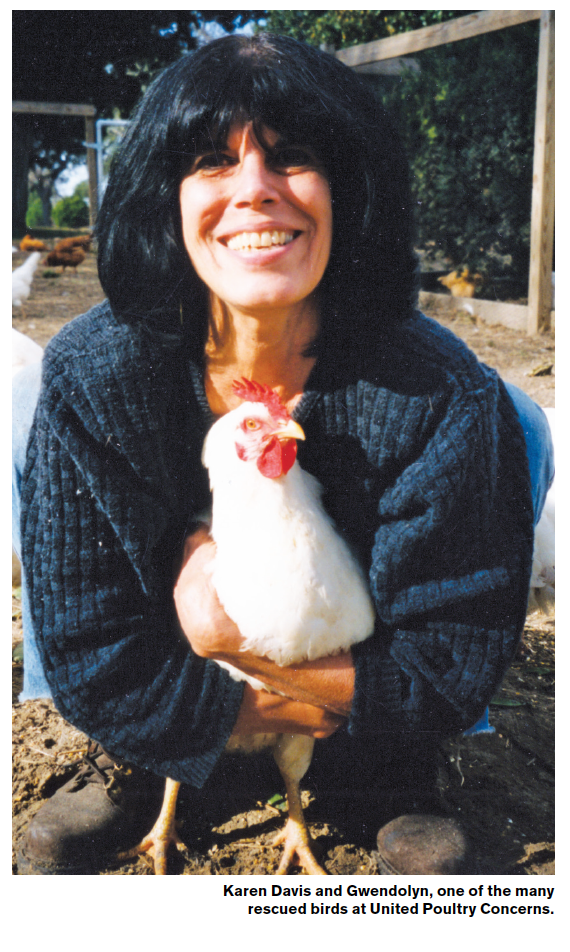 The poultry industry would like people to think that avian influenza, or bird flu–viruses currently infecting chickens, turkeys, ducks, and other domestic fowl around the world–are the fault of waterfowl running wild in the fresh air and open skies. The way to control these viruses, say industry officials, is to lock up every domestic fowl, and when the birds become infected in spite of all the biosecurity measures supposedly in place, exterminate the flocks and repopulate the prisons with new inmates.

Bird flu viruses have lived harmlessly in the intestines of waterfowl for millennia. Shed in sparsely populated outdoor settings in the droppings of birds whose immune systems have evolved to accommodate them, these viruses are kept in check. The viruses are rapidly killed by sunlight and tend to dehydrate to death in the breeze. But industrialized poultry production practices have vastly increased the potential of these viruses to mutate into highly pathogenic strains.

The concentrated confinement of millions of chickens, turkeys, and other birds crammed into squalid buildings creates the cesspool conditions bird flu viruses need to thrive, spread, and mutate into endlessly evolving strains of virulence. Environmental filth and the profoundly overwhelmed immune systems of birds genetically weakened by meat and egg production have spawned a paradise for pathogens of all kinds–bacterial, fungal, parasitic, and viral.

In Bird Flu: A Virus of Our Own Hatching, Michael Greger, M.D., describes how stuffing thousands of birds together in a building laden with feces, fecal dust, and excretory ammonia fumes irritates the birds’ respiratory passages, furthering their susceptibility to disease. The virus, he explains, “need not even develop true airborne transmission via nasal or respiratory secretions. Rather, the virus has an opportunity to be excreted in the feces and then inhaled or swallowed by the thousands of other birds confined in the shed, allowing the virus to rapidly and repeatedly circulate.”

A CYCLE OF CONTAGION

Bird flu viruses did not originate in the Western-style factory farms developed in 20th-century America and exported globally. Flu-favoring conditions for raising and slaughtering poultry go way back. As investigative journalist Sonia Shah, author of “What You Get When You Mix Chickens, China and Climate Change” (published February 5 in The New York Times), explained, “Highly virulent and easily transmissible, these viruses emerge from open-air poultry farms and markets of the kind that stretch across Asia.”

For example, every day more than 100,000 chickens are brought into Hong Kong from the Guangdong province in southern China, which lies within one of the world’s most traveled waterfowl flyways. The AV MAGAZINE 17 chickens are sold with ducks, geese, and quail in more than a thousand live animal markets where they are crammed into stacks of small plastic cages. The birds defecate on one another amid feathers, feces, blood, intestines, and live slaughter. Unsold birds may be sent back to Guangdong and then returned to the markets, causing a continuous cycling of viruses from farm to market and back again.

For centuries, Guangdong province has had the largest concentration of poultry, pigs, and people in the world. Historically, the region has spawned such global epidemics in human populations as the “Asian flu” of 1957 and the “Hong Kong flu” of 1968. What is new is the explosion of the poultry industry elsewhere in Asia and across the globe, as is the capability of bird flu viruses to combine to generate novel subtypes with varying degrees of invasivity and virulence. As Shah notes, “global poultry production has more than quadrupled since 1970,” and three currently circulating strains of bird flu–H5N1, H7N9, and H10N8–“kill roughly 30 percent to 60 percent of their reported human victims.”

To illustrate this progression, the January 2016 issue of WorldPoultry announced, “New HPAI [Highly Pathogenic Avian Influenza] strain strikes US turkey farm.” According to the article, the U.S. Department of Agriculture (USDA) confirmed the outbreak of the H7N8 virus in a commercial turkey flock in Indiana, which was different from the H5N2 virus that caused more than 200 bird flu outbreaks in American poultry flocks in 2015.

The USDA-approved method used to destroy more than 400,000 turkeys and chickens in the Indiana outbreak was “ventilation shutdown” in the poultry houses, causing the birds to slowly suffocate over a period of up to three hours.

Ventilation shutdown was government-approved in 2015 when a highly pathogenic avian flu virus entered America from Asia. First identified in British Columbia, Washington, and Oregon in December 2014, the virus penetrated poultry flocks in 21 states, resulting in a mass extermination of nearly 50 million chickens, turkeys, and ducks.

Other approved methods of avian extermination include slow, painful asphyxiation by carbon dioxide (CO2) poisoning, and smothering the birds to death under a blanket of firefighting foam. Shooting hoses filled with CO2 into the confinement houses, metal boxes, and “kill carts” causes the birds to burn, freeze, and suffocate to death simultaneously.

ANY NOTION THAT THERE CAN BE HUMANE OR DISEASE-FREE POULTRY PRODUCTION FOR MASS CONSUMPTION IS NAÏVE.

Contrary to some industry claims, the use of firefighting foam does not kill birds quickly. University of Georgia researcher Bruce Webster told a USDA meeting in 2006 (the year the agency approved the method), “You saw a lot of escape behavior for 4-6 minutes. You saw the birds’ heads sticking out of the foam.” Eventually their movements ceased, as the birds were “worn out” with their “volitional struggle.”

In a trial done with turkeys in 2007 in West Virginia, foam-soaked birds reportedly flapped under the foam for up to six minutes. Sinking under, the smothered birds cannot vocalize their suffering. Necropsies showed hemorrhages in the tracheas of birds who died under the foam; a year earlier, “occlusion of the trachea” had been cited by Ruth Newberry of Washington State University at a USDA meeting as “a serious welfare concern.” But animal welfare concerns fall on deaf ears where expediency, cost-savings, and profitmaking prevail in animal agriculture.

An article in International Poultry Production in 2015 titled “Avian influenza–the value of vaccination in changing times” observed that conventional control measures, including quarantines and mass extermination, cannot cope with the transnational epidemics of avian influenza, given the size and scope of the poultry industry and the genetic evolution of bird flu viruses in China and elsewhere. It is argued that vaccinating birds on the farm with conventional inactivated vaccines, which induce temporary immunity, should be replaced by the use of vector vaccines, in which an attenuated virus is given to the birds at the hatchery to induce permanent immunity.

However, any notion that there can be humane or disease-free poultry production for mass consumption is naïve. Human eating habits have got to change, not only because of the misery of animals but because animal agriculture is a primary cause of global warming.

In her Times article, Shaw suggests that global warming may also help spread viruses across continents, via Arctic islands in the Bering Strait. “[W]ith temperatures in the Arctic rising twice as fast as anywhere else, conditions are changing rapidly…. As birds are forced to migrate earlier and farther, feeding at new times and in new places, they overlap with other bird species in unprecedented ways that pathogens can exploit,” enabling avian influenza to pass from birds in Asian poultry farms to birds who fly from the Arctic into North America.

Ultimately, the root cause of the avian influenza epidemics is billions of human consumers. It was Gandhi who said that violence begins with the fork. If we don’t want bird flu viruses to continue to evolve, we have to evolve ourselves.

Karen Davis, Ph.D., is the President and Founder of United Poultry Concerns, a nonprofit organization that promotes the compassionate and respectful treatment of domestic fowl (www.upc-online.org).