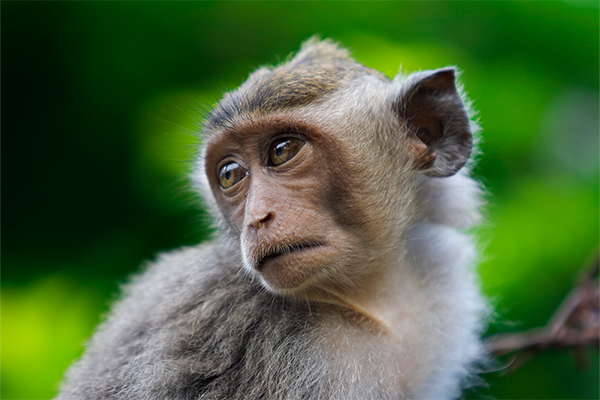 According to a report on The Independent website, several monkeys, transported from Cambodia to a research animal dealer in Houston, Texas, died aboard a charter plane operated by Wamos Air, which is owned in part by Royal Caribbean Group. Please send a message to the Royal Caribbean luxury cruise line that it’s time to end the transport of primates for research!

Packed in small crates and shipped as cargo, it’s unknown how many of the 720 long-tailed macaques died, but there’s little doubt that they experienced considerable distress and both physical and psychological suffering. But these monkeys didn’t have to suffer needlessly. Wamos Air should follow the example of Kenya Airways, which announced that it would no longer transport primates for research following a tragic accident in Pennsylvania in January 2022.

The danger associated with transporting monkeys is nothing new. In fact, AAVS documented the extreme conditions primates are forced to endure in our 2011 report “Primates by the Numbers: The Use and Importation of Nonhuman Primates for Research and Testing in the United States.” The report documents two examples: a shipment of 1,050 monkeys transported for 27 hours on three flights, and another 100 macaques shipped by plane and truck on a journey lasting longer than 56 hours. During transport and required quarantines, primates may suffer and die from pneumonia, dehydration, trauma, and stress, or be euthanized due to testing positive for tuberculosis.

Our report also noted that primates were being imported to the U.S. from Asian countries, including Cambodia, and it continues today. According to the Centers for Disease Control and Prevention, the number of primates imported from Cambodia grew from 8,571 in 2019 to 15,664 in 2020, an increase of over 82 percent! It was also noted that importers “continue to ship primarily medium-sized shipments on commercial flights.”

It’s believed that the destination of the monkeys on the Wamos transport was a laboratory dealer and contract lab called Envigo, which is a rebranding of former notorious labs, Harlan, Huntingdon Life Sciences, and others, following corporate mergers and acquisitions. According to U.S. Department of Agriculture inspection reports, Envigo houses thousands of macaques and was cited for not feeding 25 monkeys for six days in June 2019 and failing to provide proper veterinary care in June 2017.

Facilities like Envigo sell primates to labs, where they can be used in some of the most physically invasive and psychologically cruel experiments conducted in research, including biological weapon testing, developmental and neurological research, and addiction studies. Long-tailed macaques are the most used primate species in research, despite being listed as vulnerable by the International Union for Conservation of Nature’s Red List of Threatened Species.

WHAT YOU CAN DO! Write to Wamos Air and the Royal Caribbean Group. Both have received much-deserved criticism for contributing to the unnecessary suffering of animals used in research. Because these are both customer-driven businesses, as a consumer, you can influence their policy decisions by telling them that you will never fly with Wamos Air or take a Royal Caribbean cruise until the airline stops transporting primates for research.
to top