As the May 25 deadline for public comment on draft regulations approaches, the Philadelphia Inquirer published an Opinion piece by the Avian Welfare Coalition, the co-plaintiff in AAVS’s successful lawsuit against the U.S. Department of Agriculture (USDA) that reversed decades of inaction by that agency.

“For decades, our most beloved fellow creatures—from dogs and cats to apes, elephants, and dolphins—have been protected by the federal Animal Welfare Act, which sets minimal standards of care for animals used in research, transport, breeding, and the pet trade. Native and migratory birds have separately benefited from a network of laws and regulations.

But parrots and other “exotic birds”—those colorful winged creatures that we marvel at in zoos, and who stare dolefully at us through the bars of cages at pet shops and dilapidated roadside menageries—have never enjoyed legal protection under federal law, despite the fact that Congress mandated such protection over 20 years ago.

For the first time, parrots and other exotic birds are on the verge of being covered by the Animal Welfare Act. As a result of a lawsuit brought by the American Anti-Vivisection Society and the Avian Welfare Coalition, the U.S. Department of Agriculture is under court order to finally enforce the Animal Welfare Act, and to monitor how birds are treated in the pet trade, exhibits and entertainment. CONTINUED »

Although vaccine development can take 10 years, scientists were able to develop the Covid vaccines in less than a year. Author and veterinarian Merel Ritskes-Hoitinga explains that the flexible approaches used to accelerate the development of Covid vaccines should be applied in other areas of research and testing. Combined with using widely-accepted, non-animal alternatives, she argues that better medical advancements can be made at a lower cost, saving time and lives.
READ MORE »

Prosecutors in Germany are investing whether labs killing “excess” animals to save money and space are breaking animal protection laws. Labs, including those in the U.S., routinely kill animals like mice and fish because they are of an unwanted sex or genetic strain. The probe was launched following multiple complaints filed by two activist groups, citing a 2019 court ruling that male chicks, who are considered unwanted byproducts in the agriculture industry, cannot be killed for economic reasons.
READ MORE »

A study published in the journal Social Psychological and Personality Science investigated speciesism, the categorization of animals based on humans’ perceived moral value of them and their treatment. The study found that, compared to adults, children (aged 9-11 years old) are less likely to exhibit speciesism and view farmed animals as food, rather than pets. The researchers say these findings imply that speciesism is a social construct developed over time.
READ MORE » 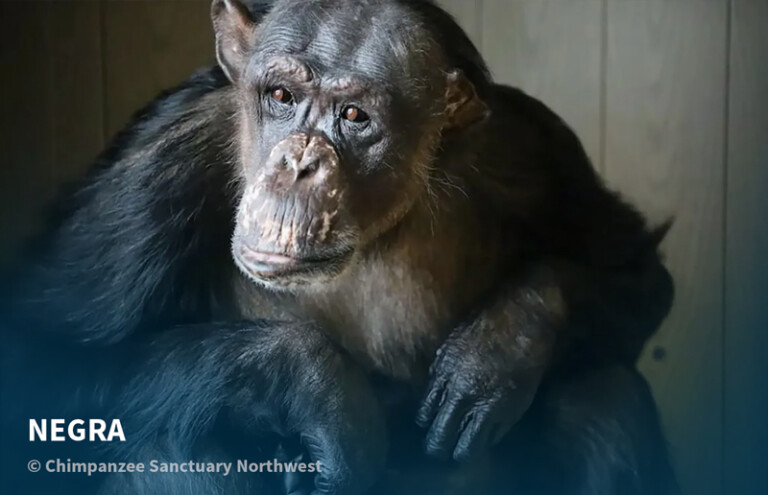 Born in Africa, 49-year-old Negra has spent most of her life in a research laboratory. Along with six chimp friends, Negra arrived at Chimpanzee Sanctuary Northwest (CSNW) 14 years ago, suffering from classic PTSD symptoms, no doubt the result of the 60 “knockdowns” she experienced so she could be used in invasive experiments. But with the love, care, and patience she received from the caretakers at CSNW, Negra was able to heal and put the past behind her. Today, this old gal is referred to as the Queen and she does as she pleases. She loves napping, picking spring grass, and wrapping herself in blankets.

“When we visited [Negra and her chimp friends] in the laboratory facility before they came to the sanctuary, the others were playing with each other and excited to see us humans, but Negra stuck to herself. She watched us warily but wouldn’t give any eye contact,” Diana Goodrich, co-director of CSNW recalled. However, after some time, “we learned that Negra likes to see us dance, and claps for more entertainment when we stop.”

Located in Washington state, CSNW today cares for 16 chimps, all of whom were once used in biomedical research. AAVS has supported CSNW for many years and is so grateful to the sanctuary for providing all the chimpanzees in its care a safe place for them to heal from their laboratory traumas and for providing a living environment where the chimps can experience all the benefits of living in a family.